Rees, 2 November 2021. With the takeover of the Manugestion Group, Novoferm, one of the leading European system suppliers of door and docking solutions, is resolutely continuing to strengthen its position on the French market.

Within the Manugestion Group, Manuregion is a company established on the market which specialises in the installation, maintenance and repair of industrial doors and docking systems. The business was founded in 1989, has 120 employees at seven sites in the north-east of France and generates an annual turnover of 25 million euros.

For Novoferm, the acquisition is an important step in the continuing expansion of the activities of the Novoferm Group across Europe. Manuregion has steadily grown in recent years as a result of its customer-focused range of services and has acquired a strong position in its catchment area.

Manuregion will be integrated into the existing organisation of Novoferm France in the future under the leadership of Eric Drain and Stéphane Keyser, the current majority shareholders.

Rainer Schackmann, CEO of the Novoferm Group, is pleased about the acquisition and believes that Manuregion and Novoferm complement each other perfectly: “By integrating Manuregion into the Novoferm Group, Novoferm can support its customers in the North-eastern French market even better with all the services associated with the installation, maintenance and repair of industrial doors and docking systems. This way, Novoferm will be creating the ideal conditions for further growth and strengthening its position in France. 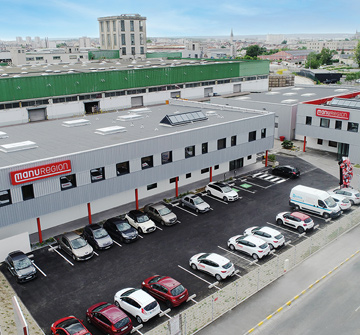 The image files offered for download here have a minimum resolution of 300 dpi. The images may be used exclusively by newspapers and magazines and only for editorial publications. To secure us from the photographers left of copyrights the picture use is only permitted quoting the source photo above.